These days I've been playing around with the latest cool utility for PureMVC MultiCore AS3 called "Pipes Utility" developed by Cliff Hall. It's a very helpful and powerful utility to communicate among all core actors of a module based application using PureMVC.

For a better understanding I created a basic example using modules. It's just a simple app called "HelloPipes", which loads and unloads a module for communicating with its shell using Pipes. Module and shell are acting as a core based on PureMVC MultiCore AS3.

The following example including full source may help anybody who is interested in the new Pipe Utility too ;-) . 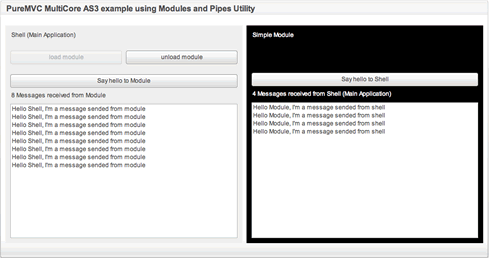